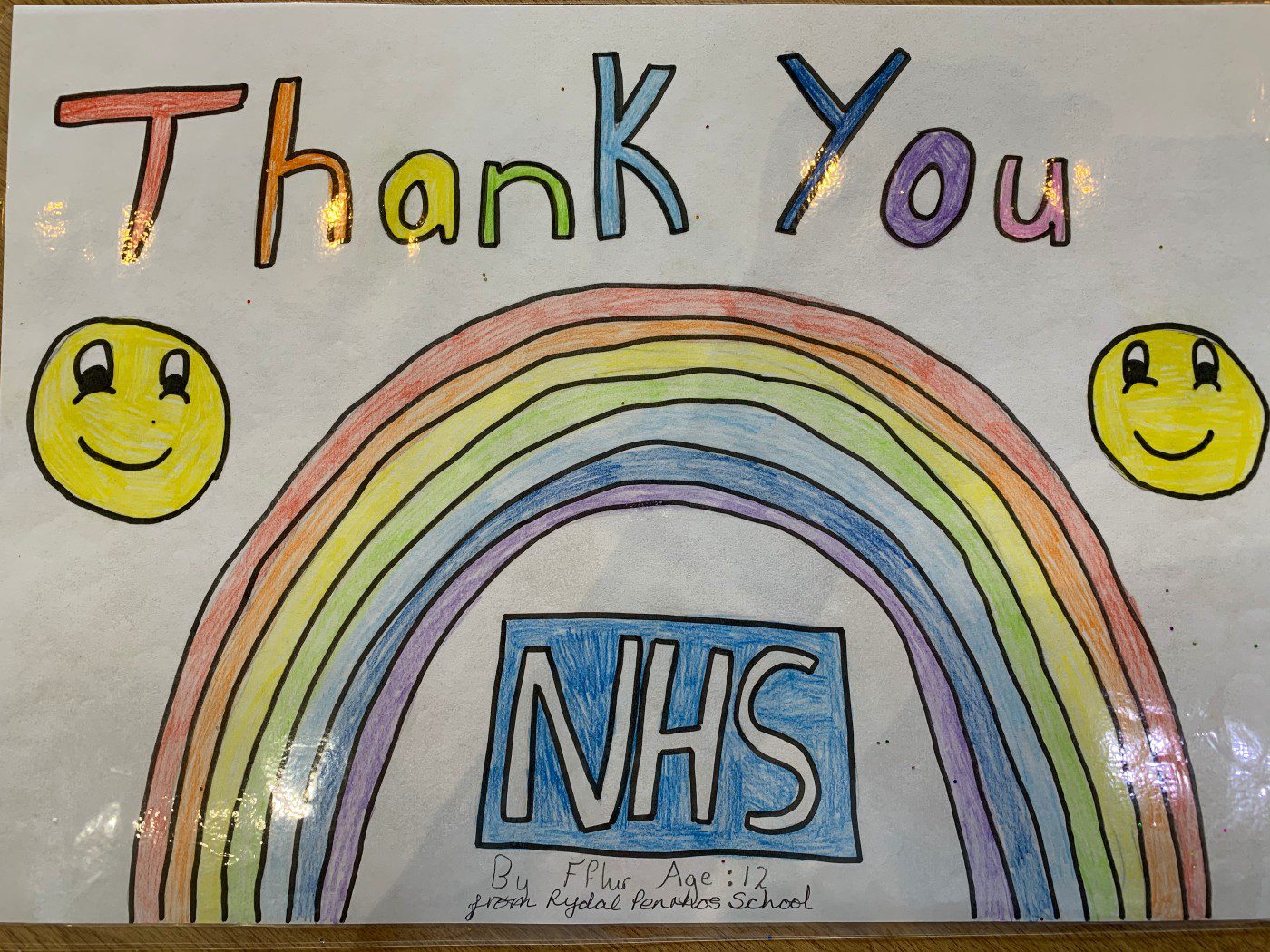 The NHS are now proud owners of ten rainbow thank you placemats designed by today’s pupils. We hope that they raise a smile whilst a short break is taken!

You might be able to tell from the photographs that I laminated the pictures to make them a little more durable. This was the only part that I had to play, other teachers helped set up the activity, pupils designed and coloured and a medical parent delivered them to the hospital.

You think that I’d be able to play my small part with the minimum of fuss… well the laminator had other ideas!

You may or may not know how a laminator works. Essentially there are two rollers alongside a very hot piece of metal; you put the piece of paper into a plastic wallet and feed it into the rollers which slowly put it through the hot plates thus melting the plastic onto the paper and ejecting it from the other end as a shiny, neat end product.

The process is quite slow and boring and gives you at least 30 seconds just watching the paper in and out. The temptation is always to start it off and turn around to prepare the next piece of paper or to trim the one that has just finished!

When starting teaching there are some pointers that should not be ignored and ‘NEVER take your eyes off the laminator’ is one of them! I was getting over-confident, several beautiful place mats had been delivered and I decided I had the required ten seconds spare to check emails on my phone. I didn’t even leave the room for goodness sake! However, when I did look up from my phone it seemed that the laminator had eaten half a place mat! Half was still to enter, the rollers were still rolling, but nothing was coming out of the other end!

I went into panic mode and switched every switch I could see, in hindsight, it might have been wiser to just switch it off at the plug! I inadvertently press the reverse button, not a good move, and a loud squeal emitted from the machine and it all ground to a halt! In teaching terms breaking the laminator is unforgivable and no-one in their right mind would confess and fetch help.

It was necessary to take drastic action myself so that no one would find out… rather like slipping in the street where the first thing you do is look around to see if anyone saw you fall, hopefully, you can struggle back up and make a limping, graceful exit!

I did now switch off the machine and unplug it to be double sure (physics not my strong point). I realised that I needed to open the top of the machine and rushed to the DT room where I spent a good few minutes rifling through drawers until finding a small enough Phillips screwdriver.

I rushed back down, closed the door, and proceeded to remove screws which lifted off the completely incorrect part of the machine! Starting again I managed to expose the very mangled, half-complete placemat and with a sheer brute force, I pulled it out from the rollers only managing to burn my thumb once on the hot plates!!

I then spent nearly 20 minutes working out how to replace the parts I had removed before switching back on and contemplating how I would salvage the tightly zigzagged placemat that a four-year-old had spent two hours making!

My solution of repeatedly placing it back through the laminator (reverse button now came in very handy!) had the desired effect and no one would be any the wiser. Or so I thought. Later on, I showed the pupils their placemats and I placed the troublesome one in the middle of the pile and tried to rush it through.

Pupil J immediately shouted, “what happened to that one?”, just as quickly I announced “snack time” and they all rushed off to the dining room!

The moral of the story is, of course, not to try and multitask when dealing with a laminator, ALWAYS keep your eye on the game!

The pupils spent the afternoon playing football golf and forest school hide and seek whilst I tested the laminator in secret and made sure that no-one would be disadvantaged by my newly qualified teacher error.

Still taking it one day at a time!