There was a hive of activity preparing our foyer display boards for the arrival of family ‘street party’ photos held in gardens and front rooms. There was also quite a bit of activity in the classroom making party hats in red, white and blue.

We did make valiant efforts to explain to three and four-year-olds about why we were making these hats… “Were we fighting the baddies?” “Yes”. “Did they have lasers?” “No”. “Did they have nerf guns?” “No”? “Did they have a space ship?” “No”…. “What did they have?” After a pause trying to think of a politically correct answer… “They had quite a lot of tanks”…longer pause…”What’s a tank?!” 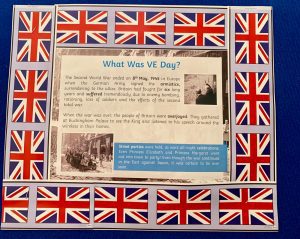 Not wanting to get into a difficult conversation involving the number of Shermans, panzers or crusaders used by the different armies in 1945 I swiftly moved on to suggest that we make a spitfire paper aeroplane.

This was greeted very knowledgeably with the words, “Captain Tom’s got one of those!”. Should I explain the reality of that comment or go for the shorter explanation?

“Indeed he has, excellent! Let’s leave it at that and finish those red, white and blue hats!”

Always better to just keep calm and carry on!