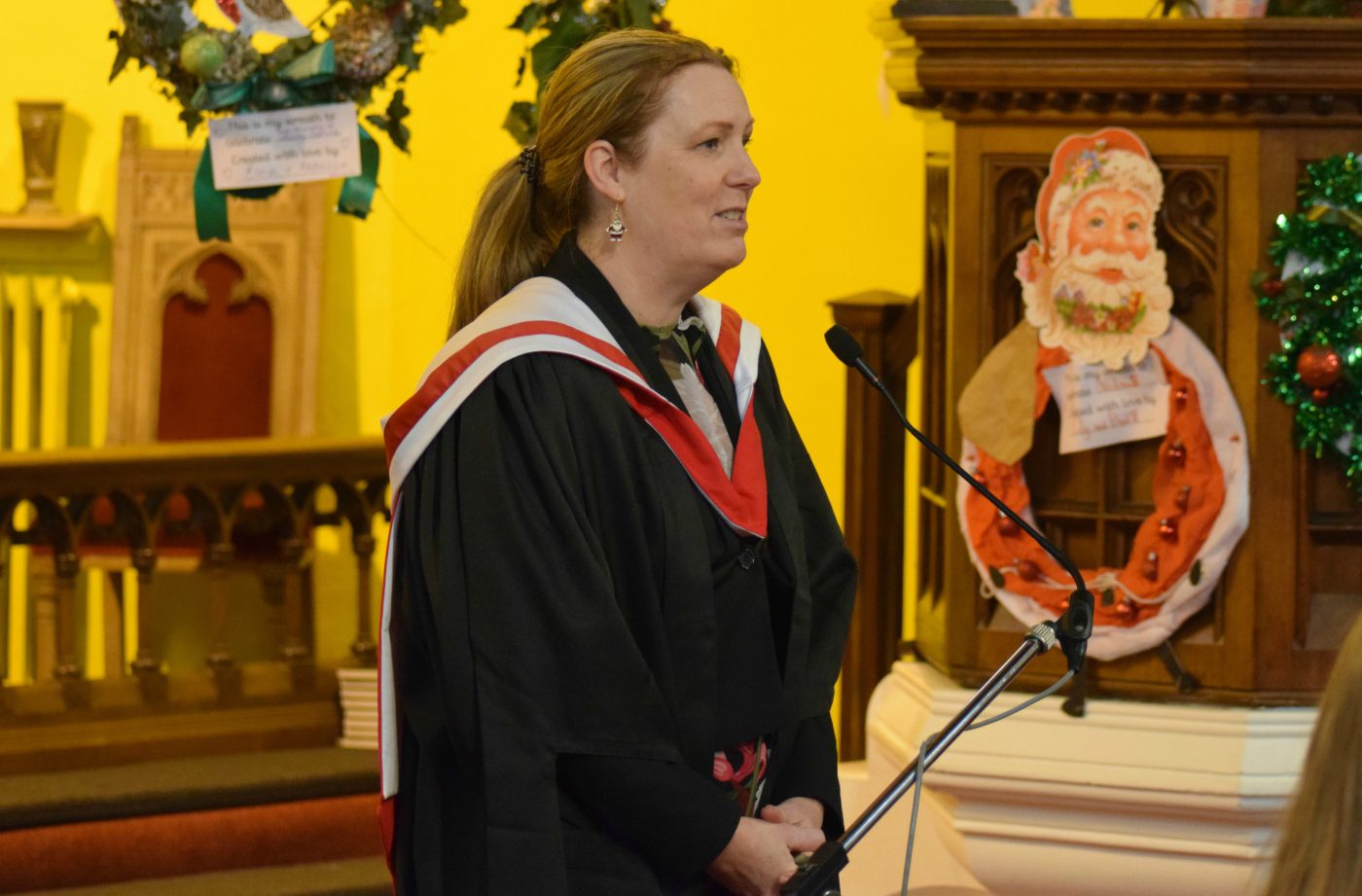 What a totally brilliant final week we have had at the Prep School, I think the children are totally geared up for Christmas now and not long to wait…two days left!!

Thank you to all staff and parents for helping out with the extra events we have had. We started on Monday when our ‘Treblemakers’ choir walked down to Merton Place care home to sing carols for the residents. It was super that they could join with the senior school choir; the carols were quietly, but movingly received by all, a real ‘tingle of Christmas’ feeling.

Moving on to Tuesday we took all the pupils from Reception up to Year 6 to Venue Cymru to see this year’s pantomime…Sleeping Beauty. I’ve seen a lot of pantomines, both professional and amateur, I’ve produced school pantomimes, I acted in pantomimes, I’ve even written and directed school staff pantomimes (now there’s an idea for next year!), but I have never seen a life sized moving dinosaur in a pantomime! The show was very well produced with fantastic effects and the pupils, of course, joined in extremely vocally! Well done Venue Cymru! By the way, I’ve got no idea what the story line was all about but if you go with your family watch out for the puppets, they were really good and I think Mr. Ducky could learn a thing or two (as one of the Year 1 pupils told me in the interval!).

Then onto Wednesday and the Christmas Fun Afternoon…thank you so much to Mrs James and the Sixth form Charity Committee and to our parents from FORPS. This wonderful event raised money for Ty Gobaith Children’s Hospice, well done everyone. Santa braved it outside in his log cabin with his troupe of elves on hand to keep the queue entertained; the secrets room was an enormous success thanks to your generous donations and yet another troupe of elves; Mr. Williams and senior school pupils sang carols in the dining room whilst we stuffed down delicious cakes and Mr. Lewis debuted as a very successful candyfloss man! In the library the sixth form games were a huge hit and the caring and supportive nature that they showed towards the younger pupils was a delight to see.

And Thursday…what is there to say? A Christmas triumph! Well done to all families for the fantastic ‘H’ costumes which were all paraded across the stage to much clapping and bowing in the morning. This just set the scene for Christmas themed lessons and then two sittings of Christmas lunch (I was beginning to feel a ‘Vicar of Dibley’ moment coming on!).

The pupils were so well behaved and all ate so well, it really was hotel standard food…incredible from our team of chefs and kitchen staff. There was some loud singing and the traditional ‘greeting of the pudding’ to bring us all luck! After this all of the pupils met Father Christmas and received a small gift. They were so polite and all agreed that they had been very good during 2019!

The day finished with a party including a disco and traditional games. I think all the staff had to go home and lie in a dark room…dressing as a Hippo, Hong Kong Phooey, a hitchhiker or Hiccup can seriously cramp your dance style!

Today we have enjoyed a lovely service in St John’s Church, where we were able to view the artistic wreaths made in family workshops earlier this month with Mrs Morris. Thank you to all parents who came along to support with the singing, some super tenors in particular during the ‘round’. Reverend Sissons managed to keep all of the actors just about in control during the ‘Angry Innkeeper’ playlet, another Christmas experience we are all unlikely to forget!

On a non-Christmas note (but still related to snow) you may have noticed the fantastic penguin sculpture installed last week next to our front door. This is the culmination of a project led by Mrs Woodthorpe who writes: ‘We are delighted to have recently received our fantastic Eco penguin sculpture, designed by Jacha Potgieter and built by local blacksmith Gerallt Evans.

The sculpture was inspired by Jacha’s impressive rhino sculpture in Betws y Coed, which is a community art project to raise awareness of the problems and dangers facing rhinos in the world.  Jacha visited Rydal a few years ago to talk about his work with the charity Orangutan Appeal UK and to highlight the problems facing orang-utans in Malaysia and Indonesian Borneo. Following his visit, a competition was held to design the school sculpture and the winning design of a penguin by Tilly Trueman was chosen.

The Eco Committee then held numerous cakes stalls to raise funds to pay for the sculpture to be constructed and they were delighted with the support from the pupils, parents and staff in their fundraising initiatives. Now that the sculpture is in place, it will be filled with the plastic lids from bottles such as milk cartons, juice bottles and water bottles. The children will be able to bring in clean plastic lids of any colour from home, which will then be collected by the Eco Committee for counting before being put in the sculpture.

We hope that the sculpture will help to raise awareness of the problem of plastic in the environment, in particular our world oceans, and the need to recycle and reuse plastic. Most importantly, we hope it will help everyone understand the importance of reducing our use of plastic by finding sustainable and environmentally friendly alternatives.’   So start collecting those plastic bottle tops!!