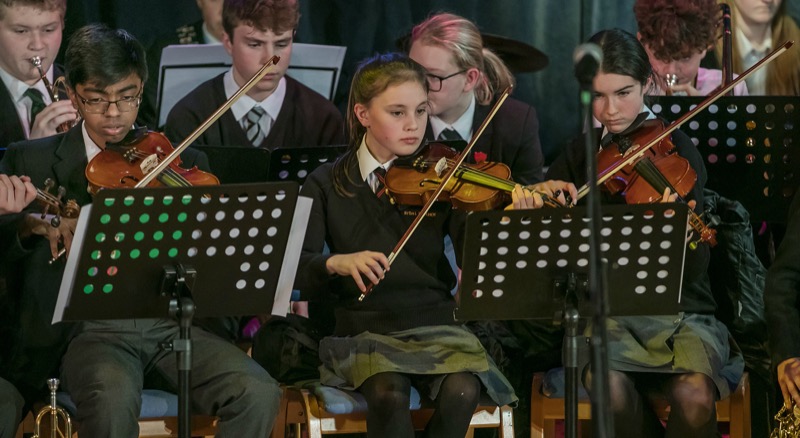 Musicians and vocalists are still thriving at Rydal Penrhos despite the recent challenges to learning over the last two years.

Among the popular initiatives well underway at Rydal Penrhos are the Senior Choir, Instrumental Ensemble and Jazz Band, which feature pupils of all ages who wish to improve their confidence and ability to perform in front of an audience.

Chamber Choir has also begun once again, with rehearsals taking place every Monday and Thursday during form time. The group performs weekly at the stunning St John’s Church and during major occasions such as the Christmas and Easter services.

There are pupils who currently meet in the music department at break times who have formed their own band, and some of the Senior Choir members sing as smaller groups as well. This all bodes well for future concerts, which have been sorely missed since Welsh Government restrictions began.

Plenty of activity is also transpiring at the Prep, with experienced conductor Alan McGuinness running the Key Stage 2 Choir and Sue Hughes in charge of the choir comprised of Key Stage 1 pupils.

Pete Williams, who is Director of Music at Rydal Penrhos, has also organised a Steel Drum group as an extra-curricular activity every Friday.

The second half of the Lent Term will be a memorable one, with two concerts scheduled within the school’s impressive Memorial Hall.

A Four Choirs Concert is scheduled for Tuesday 22 March from 7-8pm, with the annual Prep Spring Concert taking place on Wednesday 30 March from 6-7pm at the same venue.

Our pupils and staff deserve all the credit in the world for remaining resolute through such tough times. Now, they have much to look forward to and we cannot wait to see them all flourishing on stage.