Rydal Penrhos held its annual Remembrance Day services to honour fallen war heroes from the school and across the country.

Rydal Penrhos lost 106 former pupils during World War One and Two. Their memory will live on forevermore and these individual sacrifices for the freedoms we enjoy today were honoured at the school’s annual Remembrance Day services on Thursday 11 November.

In accordance with tradition, Rydal Penrhos held two services. One at the Prep site and the other within the school’s fantastic Memorial Hall, which was led magnificently by the Reverend Dr Rob Beamish.

It was a very poignant service to commemorate those fallen heroes, with the school’s Combined Cadet Force featuring prominently throughout.

There were readings from Keira Luke and Ceylin Buckley, with Head Boy Arthur Hind and Head Girl Shuthi Ganapathi solemnly reading the Last Roll Call of fallen former pupils, which was followed by a quiet moment for reflection and Ethan Bytheway playing The Last Post and Reveille.

Deputy Head Boy Simeon Murphy-Thomas, who is also part of Rydal Penrhos’ CCF programme, laid a wreath under the stone tablet outside the Memorial Hall wall that lists the Last Roll Call before Rev’d Dr Beamish concluded the service with prayers for peace.

Following the service, wooden crosses were placed under the Mulberry tree in the Field of Remembrance, which is situated in the Memorial Quad.

Each cross was made in the Design Technology department and had the name of one of the fallen from Rydal Penrhos in recognition of their ultimate sacrifice.

Sixty-three former pupils lost their lives during World War One, with a further 43 killed in the Second World War. The service was observed impeccably by our staff and pupils.

We will be forever grateful to our former pupils and other fallen war heroes that gave their lives for the freedom we have today.

They shall grow not old, as we that are left grow old.
Age shall not weary them, nor the years condemn.
At the going down of the sun and in the morning.
We Will Remember Them.#RemembranceDay pic.twitter.com/9vLPLSMNhW 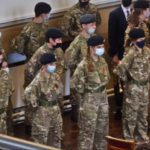 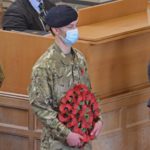