A former Rydal Penrhos pupil has released his latest highly anticipated novel based on the life of King David.

Michael Arditti became a renowned best-selling author after leaving Rydal Penrhos, and The Anointed was published on April 22 and is now available to purchase.

His latest novel explores the life of King David through three of his wives in what has already been hailed as ‘the #MeToo movement meets the Old Testament’.

It was previewed in various press publications as “one of the books to look out for” in 2020, and it has received a superb response during the initial few weeks since its release.

This is the 11th novel that Mr Arditti has written during a prolific career to date and follows on from the hugely popular Of Men and Angels, which came out in 2018. 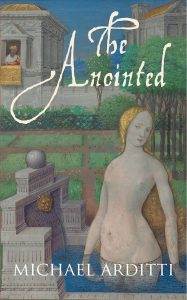 Much of his work explores issues of spirituality and sexuality. He has been described by Philip Pullman as “our best chronicler of the rewards and pitfalls of present-day faith”.

His novel Easter won the Waterstone’s Mardi Gras award and his other novels have been shortlisted and longlisted for various awards.

Mr Arditti became a Harold Hyam Wingate Scholar in 2000, a Royal Literary Fund Fellow in 2001 and the Leverhulme artist in residence at the Freud Museum in 2008.

He won an Oppenheim–John Downes memorial award in 2003, and Arts Council awards in 2004 and 2007, in addition to being awarded an Honorary DLitt by the University of Chester in 2013.

Anyone wishing to purchase The Anointed can do so here: https://www.amazon.co.uk/Anointed-Michael-Arditti/dp/1911350722.