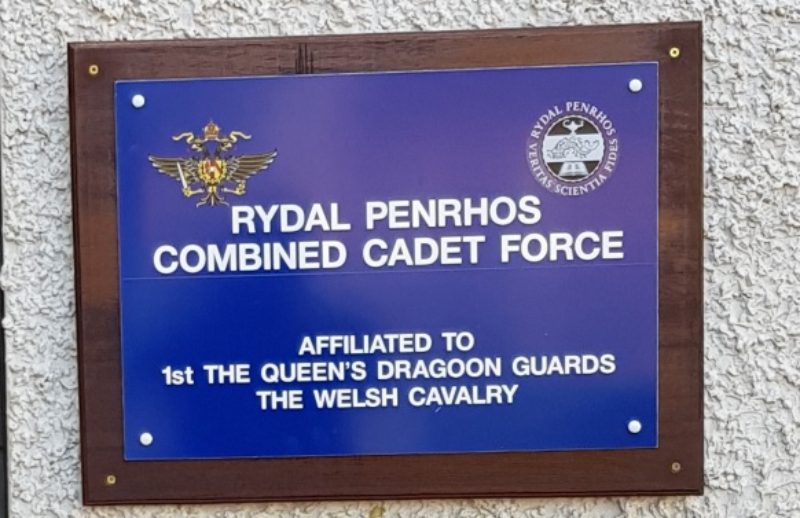 One of the most unique opportunities available to Rydal Penrhos pupils is the school’s Combined Cadet Force initiative. This is something relatively new to the extra-curricular provision provided and has made some significant strides in recent months despite the obvious complications surrounding COVID-19.

The programme received a prestigious honour last year when Rydal Penrhos became the first CCF group in the United Kingdom to proudly wear the 1st Queen’s Dragoon Guards badge on their uniforms after the “Welsh Cavalry” agreed to be the group’s sponsor regiment.

The 1st The Queen’s Dragoon Guards (QDG) is a cavalry regiment of the British Army. Nicknamed The Welsh Cavalry, the regiment recruits from Wales and the bordering English counties of Cheshire, Herefordshire, and Shropshire, and is the senior cavalry regiment.

Rydal Penrhos unveiled a plaque outside their special base on-site before the end of term, which proudly features the QDG emblem in recognition of a blossoming partnership that is proving highly beneficial for the pupils involved.

This has involved visits to the school by leading figures within the QDG, with pupils benefitting from workshops and even weapon demonstrations.

The CCF aims to promote the qualities of responsibility, self-reliance, resourcefulness and a sense of service to the community.

By joining the CCF  cadets also have the opportunity to get involved with volunteer and charitable work in the community and gain nationally-recognised qualifications such as the Duke of Edinburgh’s Award and BTECs.

Joining the CCF provides an opportunity to take part in Army activities and events, all of which will focus on building confident, responsible and independent thinking young people.

Rydal Penrhos recently opened up the CCF to Year 8 pupils, which saw a hoard of new recruits join the ranks at the start of the academic year.