Rydal Penrhos pupils have been connecting with schoolmates from across the channel as part of a special Modern Foreign Languages pen pal project.

We are always looking for ways to inspire through learning at Rydal Penrhos. Our exceptional teaching staff care deeply about each pupil under their care and often go above and beyond the call of duty to ensure goals are not only met but often succeeded with outstanding examination results, high value-added scores and meaningful progress on a daily basis from Pre-School to Sixth Form.

Another fine example of this came recently from Mrs Sophie Beech, who is a Spanish and French teacher within the school’s Modern Foreign Languages department. She got in contact with a friend working as an English teacher in Beuzeville, France regarding a pen pal project involving pupils from Rydal Penrhos and their peers from the picturesque French region.

The Year 8 and 10 groups have been participating in the project, which involved writing letters detailing a little bit about themselves, what school is like, and the recent challenges to learning throughout the COVID-19 pandemic.

Mrs Beech has been hugely impressed with the dedication demonstrated by each pupil participating in the project, which also improves reading and writing in French during a crucial stage of their development.

She said: “I lived in Normandie and have been going for years to that area. It is a very interesting region which has a very rich history. The Normandy beaches, the impressionists, beautiful cliffs in Etretat, the beautiful town of Honfleur – a charming fishing village.

“The pupils in both countries are very keen to communicate and expand on their vocabulary and sentences. Our pupils have responded really positively, and they are looking forward to their next letters and hopefully seeing the pen friends on zoom (via teachers’ computers) soon.”

This has been another extremely worthwhile academic initiative for Rydal Penrhos pupils. Something that is a little out of the ordinary but captured their imaginations along the way.

We look forward to hearing about further connections between Rydal Penrhos and our French friends in the not-too-distant future. Well done to all involved. 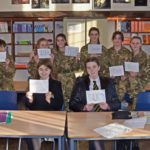 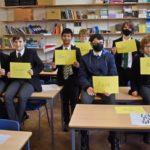