Nick Fiorita is another shining example of what can be achieved from an all-through education at Rydal Penrhos. The 2019 leaver joined as a Reception class pupil back in 2006 and achieved a phenomenal amount during his time at the school.

Such was Nick’s influence across all forms of Rydal Penrhos life, he was appointed Head Boy for his final year and represented the school exceptionally well alongside Head Girl Gowri Pradeep.

Not only was Nick a shining example to other members of the school community, but he also secured one A* and three A grades in his A Levels to secure a place at Warwick University to study Physics, attained his Duke of Edinburgh Gold Award in double-quick time and was part of the Rydal Penrhos hockey teams that secured National Championship honours.

Since leaving school, Nick has not only been busy with his studies at Warwick, but he also joined the West Midlands Police Force earlier this year, just a week before he turned 19.

He said: “I joined as a Special Constable after a number of months completing the recruitment process which I applied for the day I got my A Level results. The training was very difficult to balance with my Physics degree at Warwick University as it was held in Birmingham.

“However, both the police and the University helped me to accommodate my schedules. Sadly, training was postponed during the initial lockdown in March. This moved online for legislative training and eight days of in-person First Aid and Personal Safety training in June. Finally, in July I was attested and became an authorised warranted Police Officer.”

As part of his role, Nick is expected to complete a minimum of 16 hours a month from a shift perspective, but often does much more than this providing his university schedule allows.

Nick started his shifts in September after being in Wales over the summer – volunteering 187 hours in his first month as his lectures didn’t begin until October.

“As a special constable, you join a Neighbourhood Police Team and stay with them for one year before being able to change department if you want to. 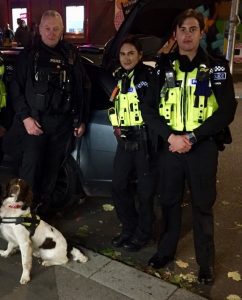 “Working in the city centre is fast-paced and means that the crimes and incidents that we are involved with are diverse and ever-changing. I managed to get rotations of half a week on each of the following teams: response, force CID and Adult PPU investigations.

“I think the most interesting arrest I have made is for money laundering, but this was quite a rare occurrence and it was even rarer that I got to interview the suspect afterwards. However, every arrest is complicated and very serious. I have not had to use many COVID-19 laws as the approach is always to use enforcement as the very last resort.”

Nick’s initial time as a Special Constable has made him appreciate the opportunities that came from a Rydal Penrhos education, which is something the pupil managed to benefit enormously from thanks to the support, guidance and care from teaching staff.

He said: “More than ever before I can appreciate how fortunate I was to receive the education at Rydal Penrhos, most people are not as lucky.”